It can be difficult at times, but to know what is real, you just need to believe.

As we find ourselves in the holiday season a question that pops up every so often, a point I guess that comes in almost everyone’s life (adult or child), is asking whether our Jolly old friend, Saint Nick, is real or not. Why do we do this? Is it physical proof that we need? Or is questioning happiness so important? Maybe we just need to find some sort of reassurance that something good is out there.

The story of Santa Claus coming around at Christmas dates back hundreds of years. It is the story of magic and wonder, the story of one man in one small village somewhere in Europe, (and I say somewhere because he eventually went everywhere) who made a decision to spread love and laughter though the joy of gifts.

The magic of this one man has engulfed the world still today. He appears with the blink of an eye and twitch of the nose. We decorate our homes, people sing songs and we honor him with parades. Presents are exchanged and end up under trees, faces are lit up and laughter is shared. How is that not real?

I don’t question Santa’s authenticity now, but did I ever? Perhaps. I cannot recall exactly. Maybe it is because I don’t want to recall any moment of doubt.

Several years ago I fell victim to a viral brain infection and in many ways I have been struggling with it my entire life. Most doctors did not think I would come out of my coma, but I did. Teachers did not think I was capable of getting back into school, but I was. After failing my first attempts at a few classes (both in High School and Collage) I was told that I’d never graduate, but it happened. I have gotten myself, brain injury and all, to a place in life that a lot would not expect. There was never any proof that I’d get through these things, I just did them. I believed, and that is real. 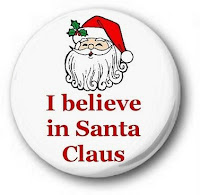 From all that I have learned over the years through my experiences, my work and volunteerism in non-profit, the stories that have been shared. Life and people have grown, overcome and accomplished through believing. And that is real.

The donations, the food drives, the toy drives, the clothing drives. The Christmas light shows that raise money to give away to charities. It is the inspiration and the magic of one man; Santa. Hundreds of years ago and still today. And sometimes that inspiration and magic even spreads into the rest of the year; not just at Christmas time.

Throw any darkness my way. I will never stop believing.  And this year we have all seen our fair share of darkness in the form of a virus that no one saw coming. THIS, is a most important time to hold on and continue believing! Believe in the magic and the joy.

So you ask me if Santa is real, I believe it to be true. And I am certain I am not the only one. After all, it is why milk and cookies are left out every Christmas Eve.