The Character in Me & You

A few times now I have discussed with a few others (not on this blog) the subject of Disability versus Personality. So, I thought I'd share my feelings on the subject; a combination on the discussions I've had.

First, according to Wikipedia:

A disability may be physical, cognitive, mental, sensory, emotional, developmental or some combination of these. A disability may be present from birth, or occur during a person's lifetime.
Disabilities is an umbrella term, covering impairments, activity limitations, and participation restrictions. An impairment is a problem in body function or structure; an activity limitation is a difficulty encountered by an individual in executing a task or action; while a participation restriction is a problem experienced by an individual in involvement in life situations. Thus disability is a complex phenomenon, reflecting an interaction between features of a person’s body and features of the society in which he or she lives.

Personality is the particular combination of emotional, attitudinal, and behavioral response patterns of an individual.

The definitions are fairly different, especially in length.
While it may be difficult to see how a physical disability can affect or be compared to personality, let me reassure you, (in my humble opinion) it can. All disabilities, whether physical or not, (visible or invisible) can have an effect on a person's psyche...... the degree of that effect can of course vary.
A person who acquires a disability may not be as jovial or outgoing as he or she once was. Or, in fact, they may become more comical in some things because they feel the need to cover up other insecurities. There is a fine line between disability and personality and hopefully each individual can see that for themselves, it only helps in knowing true self awareness.

For example: I have a difficulty in participating in group settings; getting my thoughts straight and just understanding everything being said is what I concentrate on. I'll admit that in certain social settings as opposed to business ones this can be a little easier. But still, it is a difficulty I have and this is because of my disability...... I just can't keep up with certain things. Now, on the occasion, I have been called out on this, with someone poking fun at my non-yammering.
When I don't pull that individual aside to stand up for myself and explain my difficulties, that's my personality..... my shy and quiet personality that tends to persuade me to not to stand up for myself and allow the traffic to run me over. (not literally!)

I once heard this story about a mom questioning whether her child's outburst at the age of three was due to that child's personality of a three year old having a typical temper tantrum or if it was because of the ADHD the doctor diagnosed that kid of having. My first question is how does a kid at three get diagnosed ADHD? I'll admit, I don't know a whole lot about ADHD, but I don't think I've ever met a kid (or rarely) under the age of five (and I've met quite a few kids) that hasn't had a problem with attention or has never been hyper.
This also raises the question, what if this kid never acquired ADHD and was born with it? Is there even a difference between personality and disability if someone is born with a disability?

But my real question, and this one relates to all disabilities, is, does it matter?
Does it matter where the disability ends and the personality begins?

Disability may offer explanations to certain challenges and/or barriers, but ones disability should not be an excuse for bad behavior or missed opportunities or a reason for not living life. Just as I would hope someone's personality does not become the "cry me a river" saga or worse, self denial that may lead to misery and/or unhealthy living.
Like I said, it is a fine line. But I don't like to think in terms of personality versus disability. I mean, there may be quite a few people out there that would like to get to know my personality, but not many who would have the patience or understanding for my disability. So instead I like to think of them both as parts that make up what really counts: Character.

Character, or character structure, is a system of relatively permanent traits that are manifested in the specific ways that an individual relates and reacts to others, to various kinds of stimuli, and to the environment..... how the individual meets the psychosocial challenges of the life cycle.

That "life cycle", that "stimuli", includes disability, personality, experiences, (past & present) relationships,...... the list can go on and on. But what it comes down to is, we are who we are. All that I just mentioned, and more, is our make-up of life. There is no reason to shy away from them or be ashamed; and as long as we know that there are different traits that make up us, there is no need to worry about and separate them.

Character is what matters.


“Pain has a curious way of pushing you to understand life on a different level.” ~ Natalie Jeanne Champagne

It was in January of 2011 that I decided to start a blog and it took me a few tries to come up with and settle on the title, Challenging Barriers. The blog was inspired from a dissertation I wrote about my disability and the challenges it has presented in life. I wanted to create something similar but different at the same time. I didn’t want it to be just about me, about my specific challenges and barriers, but about those we all face in life.

I met Natalie through a Social Media outlet sometime around mid 2011. I cannot recall the exact date and I don’t know for certain which Social Media format it was, but I think it was Twitter. (We are connected on Facebook and LinkedIn as well) I think Natalie’s profile was suggested to me because we are both writers. We are also both Canadian, and in our own ways have dealt with disability and illness; though I don’t think those last two were behind the suggested connection…… I could be wrong.

The fact that Natalie writes various articles, including having a permanent position with HealthyPlace.com, where she advocates for the recovery and awareness of mental illness, makes her book (for me anyway) that much more inspiring.

“The Third Sunrise….. A Memoir of Madness” is the name of the book. Unlike my book, this was and is her life’s story. Natalie tells the tale of a young girl who is diagnosed with bipolar at the age of twelve and also the later-in-life struggles with alcohol and drug addiction.

I once read Natalie having said that she hoped her book would maybe help someone going through similar battles. I would have bought the book based on that sincerity alone if I had not already decided to purchase a copy. But I can tell you this, even though I do not have bipolar and I do not ,nor have not, struggled with addiction, the book helped me. It opened my eyes to things I knew little about. It lead me to discover yet another appreciation for life and the ultimate strength people can have. It helped me remember that no matter how hard things may feel to us, we are never truly alone in our desire for something better.
I enjoyed reading Natalie’s book for quite a few reasons, but I’ll focus on two. The bravery behind her words; because I can only imagine that they were hard to write and re-live. As tragic as this story may be at times, at the core root of it, that kind of honesty is a beautiful thing to share. The second is the way in which it read. The read, to me, was easy. Because it seemed like, even though I was reading the words, Natalie was there, telling me her story…… often joining me with a cup of tea. (I usually have tea when I read.)

This is a story of struggles and illness, and ups and downs. It is dark and it is sad. (Though I found some of Natalie’s sarcasm a bit humorous; perhaps the sarcasm was needed to help her write the book and for us to read it) It is also gritty and honest, and I applaud her for that. Honesty, even if for the better, is not always easy. But the book is also hopeful; in the end, it is hopeful. That is why it is such a great book.
Tragic tales with a glimmer of moving forward are important, not only for those going through a similar battle, but for anyone in today’s world that can come to face darkness and despair. We all need to know that even some of the worst stories can find light. People can find strength even when they think it is lost. This book definitely proved that to me and it is well worth the journey through the pages of The Third Sunrise. 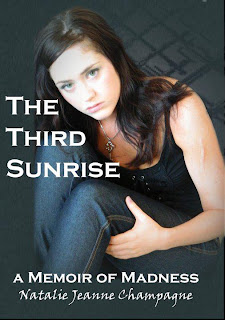 Visit Natalie's Home Page to purchase your copy.
Posted by Mark Koning at 9/13/2012 No comments: