Sprinkles On a Page

There are a lot of things in my life that I am proud of, and that includes the written word I share though this very blog, articles, short stories, my novels..... it could on. Writing for me is a very personal thing, whether it be a fictional story or my expressed opinion, I'm sharing parts of my inner soul.
Now I said that I am proud of a lot of things, but they are all on my own made up scale, some meaning more than others. When it comes to writing I refer to my first published novel, "Chronicles of a Girl". But let me back track a bit and give you a brief history.

Creativity has been part of who I am for a very, very, long time. In my younger years before entering high school I enjoyed the art of storytelling and I did manage to occasionally put pen to paper and churn out a book; never published, but a great literary piece non-the-less. I present to you "Donneedon Adventure." 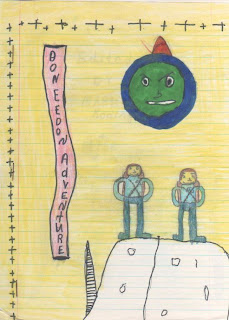 It was loosely based (at least the title) on an educational television series I was watching in school at the time, (called "Read All About It") but mainly it chronicled the tale of my best friend and I and the adventurous stories we put ourselves through in the neighborhood we grew up in; with a space theme to it. I also wrote "I Hate Johnny" and "Land of the Pips".

Once I moved into high school though, I put my storytelling pen away and focused on school work. I thoroughly enjoyed two classes, Media English and Art. I loved the essays we got to write after reading "Catcher in the Rye" or watching "Good Morning, Vietnam". And drawing in art class was a form of expression enjoyed so much that I tried to carry it
over into my college years. I liked creating visual images with my pencil, an outlet of the ideas I manufactured in my brain. Achieving my "Graphic Design" diploma though never quite turned out to be much in the way of a career down that path. I tried, but it was hard for me with all of this new technology that seemed to be part of the design world. My schooling was just on the cusp of things I guess and I never got much of any educational training in it...... but to face facts, the technical aspect of it was just too much for my little brain to handle.

So, that summer I spent my time visiting with my Grandfather, in the little town of Sutton, where I currently live. I began volunteering down the road from our house at the historical Red Barn theatre. (Sadly it caught fire and burnt down in 2008) I say that I began volunteering because within weeks it turned into a job that lasted eight years. Working in stage production and being part of this creative world was something I became hooked on very quickly. I was involved in helping to set decorate, set design, collect and create props, and I learned a lot about lighting and sound and all that neat theatre stuff! I even got to sit back stage and operate some puppets for a show one time. Something else I really enjoyed was that for the first time, not only was I participating in the creative process, but I got to see the outcome it bestowed onto people. The laughter of the audience, the reviews, and the Q & A sessions we did for the few children shows we had.
Another thing the theatre did for me was rekindle my enjoyment of writing. Part of my job was to read through the scripts to get an idea of the show. I began thinking that these stories could, or should, have this in it or that placed there. I thought, I could write something like this.

That path lead me to try and join a summer school course for script writing, but not enough people signed up, so it was cancelled. I was disappointed but not discouraged, and after some thought I decided to enroll in a Creative Writing program with the Stratford Career Institute. Because this two year program was done through correspondence I managed to graduate within one year and a few months. I was really into the lessons on "Scene & Structure", "Theme & Strategy" and "Characters & Viewpoint" to name a few. After I graduated I began writing articles and short stories and my ideas were all generated from personal experiences and growth. Some things were published, quite a bit were not. But it was all a growing exercise for me, which I needed, and I don't regret the path I've taken at all.

I started out writing "Chronicles of a Girl" as a short story about a young girl going through tough times and overcoming things, and like my creative path, it grew. My main character, Chloe Anderson, took over (so to speak) and when I was done I had a two hundred and seventy five page manuscript in front of me. I had ideas for a follow up (which I just released) and even a third. (working on it)
I may have jumped into the publishing world a little too quickly and I got myself caught in some rocky terrain that I had to work my way through, but I think it was worth it..... for me anyway. Some big bumps were overcome but I am sure there are more still out there to deal with, and I can only handle them at my speed and in my way, not anyone else's; although advice from others always helps.
Growing and learning, for me, never gets old.
Before I published my second book I was told that maybe I should learn from those rough patches that I encountered, before, during, and after my first book and forget about the continuation of the "Chronicles..." series and start fresh. While I definitely learn, or try to learn, from EVERY rough patch, I cannot forget about Chloe Anderson. She has a story to tell, I have a story to tell, I am her Ghost Writer, and I cannot turn my back to that. I'm ready for any difficulties that may come at me, just as she is. At the core of it, unseen in the pages, "Chronicles of a Girl" is the "chronicles of Mark and his creative path". Every thing I do, every page I write, every word I utter, has a sprinkle of me.

I think none of us should give up on our dreams, to turn away, and force our "sprinkles" into another direction. We all have a talent, something we can do that we enjoy and are good at, and it should be, at the very least, considered. So don't give, because I'm not going to.
Posted by Mark Koning at 12/03/2011